Greetings! Welcome to the world of Hero's Song! Feel free to sit back relax and read up on How To Play Guide; your guide to the basics on Gameplay, The World at large, exploring the History of the created world, random Crafting of various Items, the Gods that you've added, any of the Races and Classes that have been created through the History which has developed over a millennium or more, Magic, as well as quite a few other things. 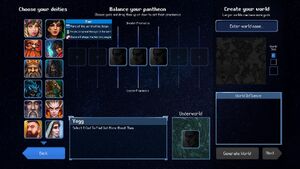 The world creation screen, where you pick between which deities and their prominence will influence the world through over the next 10,000 years.

Although there's still lots of work ahead of the game, the devs are proud to present this labor of their love. The game is in the beginning stages. Feel free visit the subreddit or the forums and let them know what you think of the game, what you'd like to see, and what you think needs to change! Hero's Song can only become a great game with your valuable input. The game should be updated frequently, so enjoy and welcome on this epic hero's journey.

As you load up the game and hit play you'll first need to set up a world, before you dive into the Gameplay. You'll see the screen (see left) with the deities on the left, to pick from, the World name and overall influence on the right, your preferences and the prominence in the middle, and below a bit more info on the specific God as well as your pick for the god of The Underworld. Each of the worlds that are created are unique, as defined by the Gods you've chosen.

There are 22 different Gods each with their own 2-3 semi unique traits, ranging from chaotic, order to peaceful to forest, water to desert, each spawning more of that type of trait into the world through the History of the given world. Depending on your preference to the size of the world, you'll get to pick 3, 5 or 7 Gods and can define their amount of prominence in the world with the sliders up and down. You'll also need to pick a God of The Underworld, which plays into if and when you die (more on that below). Click on any of the Gods below to see more of their traits and their history.

Once you've decided on your world's deities, the world will populate a recorded history, with major events like war, invasions and ruler overturning in the world over the next 10,000 years. You'll be able to see on the map where each Event has taken place, and will be able to interact with that, once you spawn in, depending on how close you are to it. Next up: Choosing a character!

In the world, you'll be able to create a few different characters to roam far and wide. Pick between Male and Female, and between the current 10 Races you think best to play. There's also 15 current different Classes to choose (8 classes are coming soon), each with their own Abilities, Passive skills and Magic.

A look at one of the Castle Cities in Hero's Song. 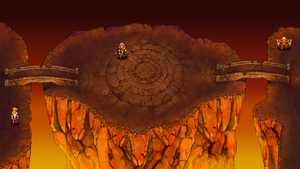 There's not much to do in the game right now, as there's no quests or adventures, but you can find some yourself with the Events that are throughout the world. Hit M to pull up the map, and you'll notice various Events; Cities, Dungeons, and Events. Each of the "tiles" on the map are pretty large and can take quite a bit of time to fully explore, but in that tile if there's an event you'll be able to find if you look the given activity as specified in the map. 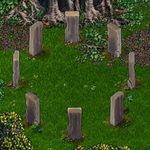 One of the Events from the world 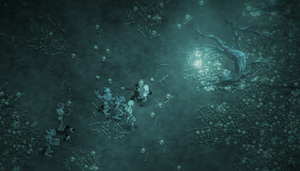 A view of the underworld, and the Creatures you'll face on the other side.

If and when you die, since it's bound to happen, you'll arrive at the gates to The Underworld. Currently you'll need to fight your way through about 5-10 enemy Creatures (Skeletons and Gargoyles), and you'll be able to find a door. If you manage to make it through, you'll arrive back at the overworld at 50% of your health. If you die in the underworld you're dead in the game, and you'll need to restart the character creation, to create a new character.